I wanted to stay up and watch the Indianapolis Colts' game against the New York Jets last night.

It was planned as soon as the schedules were released in the spring, This was the only Monday Night Football game of the season that I was going to watch live. The rest could wait until the following morning.

But then WWE came along and announced that its December PPV would take place on Sunday December 4th.

The plan went out the window.

It wasn't a case of choosing one over the other. I have to keep an eye on the WWE stuff nowadays and two late nights in a row are a killer. I went with Sunday's WWE show and went to bed early(ish) last night.

But don't fear - the first thing I did when I awoke was turn the iPad on and watch the Colts beat. No.. DESTROY the Jets on NFL GamePass. Siri says it best: 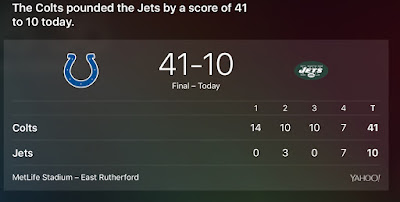 Yes, it was a pounding.

This now means the AFC South has a three-way tie for first place. Houson, who are also on even par with the Colts, are next on the schedule. I have to admit, I am concerned about this game. My betting system doesn't have a fondness for teams' chances if they played on Monday night as their routine is messed up by a day or so. I haven't put the numbers in yet, but I am not looking forward to seeing what it's telling me to bet.

Not that I will bet. The Colts don't need me jinxing them at this crucial stage!
Posted by David Taylor at 12:59 PM