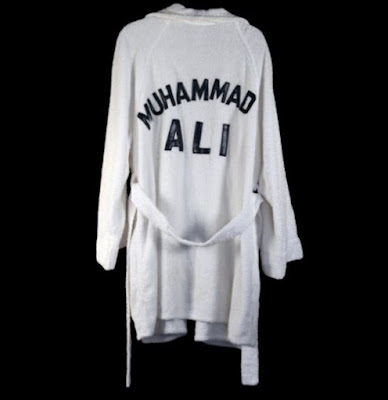 Those two sentences should indicate that I was not around during Ali's peak. It does not mean I haven't followed his career.

As soon as I was old enough to know better, my father introduced me to Muhammad Ali through fights, documentaries, books and his legendary interviews.

Ali was the gateway.

The thing about Muhammad Ali that everyone knew before today, but will be really noticeable in every news report about his life is that he transcended boxing. He became more than one of the best fighters in history. He was more than that. I'm only stating the obvious, but it will be - or should be - the main angle when discussing his life.

I wish I could have lived in an era when I saw his fights live. I would have had more to write about today. But it isn't to be.

For the last thirty-plus years I've witnessed him in one big fight. He went toe-to-toe against Parkinson's Disease. I'd like to think that at many points he had that thing on the ropes. Even though it affected him, it didn't stop him from doing things like lighting the Olympic torch in 1996.

He could have taken the blow and leave to live the rest of his life away from the public eye. He didn't.

Him going out there and still making his appearances when the disease was robbing him of the hyperbole and charisma was classic Ali. In my eyes, he was taking the beating, but the win was coming.

The win was never going to come by beating Parkinson's. I believe the victory was making people aware of the condition.