I have just finished watching Creed. 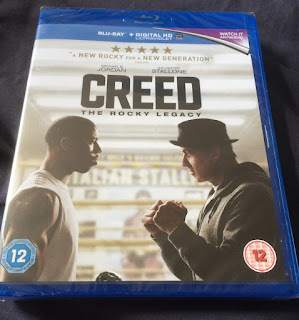 Yes, I'm biased because the Rocky Balboa is my favourite movie character. However, this film really is great.

The title character is the illegitimate son of Apollo Creed who was born after his father was killed in the ring (in Rocky IV). To cut a long story short, Adonis ends up seeking out Rocky and asks his father's former rival to train him as a pro.

Balboa does get to fight in this movie. Well, sort of. He ends up being diagnosed with cancer so he ends up having to battle that like only Rocky Balboa can.

I was worried the movie would end with Balboa succumbing and passing the torch over to his protege. Thankfully, the torch passing didn't go the way I had envisioned.

It was fun getting to catch up with Rocky again. I didn't like finding another character had died in the meantime, though. Paulie (Rocky's friend and eventual brother-in-law) didn't make it since we last checked in with the franchise in 2007.

With that said, it did pave the way for Rocky to make new friends in Donnie and his girlfriend, Bianca.

I really hope there's another sequel to this. The end teases the possibility just like the close of the original Rocky did.
Posted by David Taylor at 12:00 AM