The Day WCW Came To Town 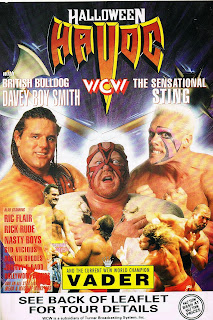 It's twenty years today since I first went to a live American wrestling house show.

I had been to numerous British wrestling shows but when I found out that World Championship Wrestling was coming to the Cardiff International Arena, I had to go.

My friend and I queued up for tickets on the day they went on sale. This turned out to be a waste of time as they didn't end up getting delivered to the box office. We ended up purchasing the tickets from another agency and they were sent to us at a later date.

Whenever anybody utters the words 'WCW' these days, I'd guess a lot of people will be reminded of how poorly the company operated in its final days.

It was a different story back in 1993. Hulk Hogan had yet to make his switch and the main TV show WCW was producing was Saturday Night on TBS. The UK audience got to see WCW Worldwide late on a Thursday night (in my television region) or - if they did a bit of searching around - could catch WCW programming and PPVs on the German satellite sports channel, DSF.

The WCW Halloween Havoc Tour, as it was called, opened up in Cardiff so we got to see all the wrestlers who had been advertised in the press in the months leading up to the event.

Sid Vicious and Arn Anderson ended up getting into a Blackburn hotel scissor brawl a few hours after leaving Cardiff which resulted in a hospital stay and both missing the remainder of the tour.

The show opened up with The Hollywood Blonds (Steve Austin & Brian Pillman) going up against 2 Cold Scorpio and Marcus Alexander Bagwell.

As far as I was concerned, this was the ultimate start to the show as I had spent the summer of 1993 wearing out a videotape of the two teams wrestling on an episode of Worldwide I had recorded. I loved Scorpio's high-flying but thought the Blonds' act was brilliant.

Their music was kick-ass, too.

I think the next match was between Maxx Payne and 'Ricky 'The Dragon' Steamboat. Unfortunately, I cannot remember much about it other than Steamboat having Payne in an arm bar and was laughing with the crowd for some reason.

During the third match on the card - The Nasty Boys versus Arn Anderson & Johnny B. Badd - I was approached by a WCW staff member and told to meet him during intermission.

There's a good reason why.

My local radio station had 'The British Bulldog' Davey Boy Smith on as a guest host playing his favourite songs. In the days leading up to the Sunday show, I had called the station asking if he really was going to be there in the studio. They confirmed it. So, what was I going to do? I was going to wait outside the radio station building of course!

I sat outside waiting in my father's car but Smith didn't arrive. The realisation that I had been duped struck me when the Bulldog's voice came on the radio we were listening to. I even recall the first song he played 'Don't stop 'til you get enough' by Michael Jackson.

And I wasn't going to stop.

When I arrived home, the first thing I did was phone the radio station and once again asked them if the Bulldog was live in the studio. The person on the other end once again told me he was, so I called them out on it.

They ended up telling me they would make good on my disappointment and allow me to go backstage.

So, as soon as the tag team match finished, I ran to the point where the WCW agent had told me to meet him. We ended up having to wait by the entrance way for other people with backstage credentials to arrive. Luckily for me, Arn Anderson and Johnny B. Badd had yet to leave the ring so I got to say 'Hello Arn' and 'Hello Johnny' as they walked past me to the dressing room. 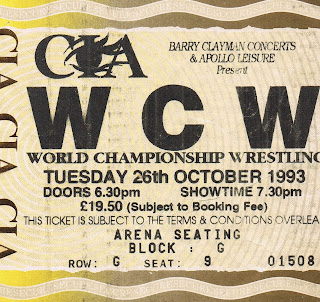 We were them whisked to the backstage area where we had to wait to meet the Bulldog. When we were waiting his arrival, I noticed a table filled with the wrestler's attire. I got to see the Hollywood Blonds' silver waist coats, Maxx Payne's leather jacket, Steamboat's Dragon costume, the Nasty Boys' coats and the WCW tag team titles.

After a short while, the wrestler came out to meet us.

Only it wasn't the Bulldog.

Sting took some time to shake our hands and talk with us. We were all given a WCW programme and he signed them.

Once he had left, the person looking after us brought out the Bulldog.

I remember shaking his hand and thinking 'wow, his hands are tiny'. We chatted with him for a while. I recall telling him I watched WCW on DSF (don't ask me why) and then he had to go.

We ended up back in our seats for the after-intermission match.

Unless I'm mistaken, I believe this was the bout between Lord Steven Regal and Ric Flair. I loved this. Regal and Flair were - and still are - two of my favourite wrestlers so it was a treat to see them work together. I have got to mention Regal's manager - Sir William (AKA Bill Dundee) - who got the crowd worked up with his out of the ring antics.

Following on from that was a tag team match. Rick Rude & Sid Vicious took on Dustin Rhodes & Sting. I was a huge Sid Vicious fan back then. Huge. So when he came out, I was going mental. My friend and I ended up shouting his name throughout the match just to get his attention. It seemed the rest of the audience were cheering on Sting but we would not relent. My personal highlight was when Sid looked over at us and nodded his appreciation.

As soon as the battle ended, I ran over to the aisle way hoping to shake hands with Vicious. The best I could do was to lean as far as I could to touch his back.

The main event of the evening was a WCW title match between the WCW world champion - Vader - and the British Bulldog. Before the night started, Gary Michael Cappetta ran down some rules and noted that wrestlers can be disqualified for throwing their opponent over the top rope.

This should have telegraphed what was to occur later on in the evening when the Bulldog clotheslined Vader to the outside of the ring. It ended up being a DQ loss for the Brit.

I went to see WCW in London seven years later. This was at the point when the company was on its last legs and the show was the worst event I have ever attended.

With that said, the experience from the '93 tour offsets what I had to endure in 2000.