Last week, the eleventh Animal Crossing turnip selling post was done in diary form. I thought I'd do this week's edition in diary form again and go one further by combining the 'Buying' and 'Selling' posts.
Sunday 5th July AM
I found Daisy Mae outside the museum this morning. She was selling the turnips at 102 Bells per vegetable. 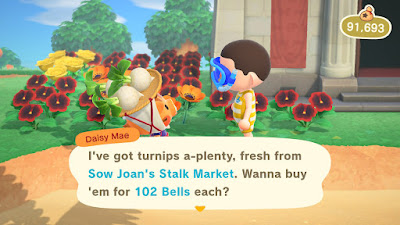 I attempted to buy 2,000 turnips, but realised I didn't have enough so withdrew some more Bells and headed back to the seller to get what I wanted. 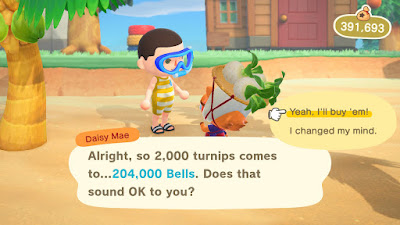 I now have to try and make over 204,000 Bells.
Monday 6th July AM
The first offer of the week was 90 Bells.
I keyed the number into the turnip projection website and it currently predicts that there will be a large spike. The chance it has given is 86.2%, The other possible outcomes - 'decreasing' and 'small spike' - have been given 9.58% and 4.19% respectively.
This afternoon's offer is estimated to be between 84 and 143 Bells.
Monday 6th July PM
The offer turned out to be in the range of 84-143 Bells as predicted. 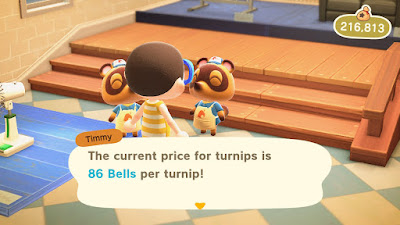 I put the 86 Bells offer into the projector. It has now given 84.9% to the chance of there being a large spike. This is down from the morning's 86.2% estimate.
The first offer for tomorrow should be between 80 and 143.
Tuesday 7th July AM 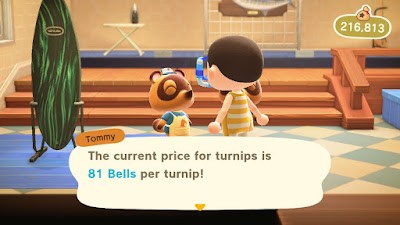 This morning's price per turnip was in the predicted range of 80-143 Bells. In fact, it was close to the low end of the estimate - 81 Bells.
The projection for the week now lists a large spike at 83%, a decreasing trend at 12.9% and a small spike at 4.04%.
If I'm going to get the large request from Timmy and Tommy, it's going to happen between Wednesday afternoon and Friday afternoon.
As for my second visit of today - the offer should be between 75 and 143 Bells.
Tuesday 7th July PM
This afternoon's offer was 76 Bells. Once again, a Bell higher than the lowest estimate.
The projection website has lowered the percentage on there being a large spike from this morning's 83% into 80.4%.
The decreasing odds have worryingly risen to 15.6% from 12.9% while the small spike projection is now at 3.91% from 4.04%.
The website is predicting Timmy and Tommy will want turnips at a rate of between 70 and 143 when I visit tomorrow morning.
Wednesday 8th July AM
72 Bells was what Timmy and Tommy are asking for turnips. 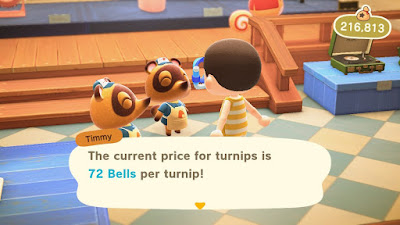 I've keyed the offer into the projector and the prospect of a large spike has dropped into 76.5% while the prediction that the offers will decrease across the next visits has increased from 15.6% to 19.8%. A small spike has dipped to 3.72% from 3.91%.
It isn't looking good. If I'm going to have a good week, the big offers should come between tomorrow afternoon and Friday afternoon.
The prediction for this afternoon is 66 to 143 Bells.
Wednesday 8th July PM
The afternoon offer was 68 Bells.
The projection website now has the large spike down to 69.6%, the small spike down to 3.38% and 'decreasing' at 27.1%.
Friday AM and PM is now the period where there will be a spike. IF it happens.
An estimate of 62 to 143 Bells is being made for tomorrow morning's visit.
Thursday 9th July AM
As per usual, this morning's offer was very close to the low end of the prediction. 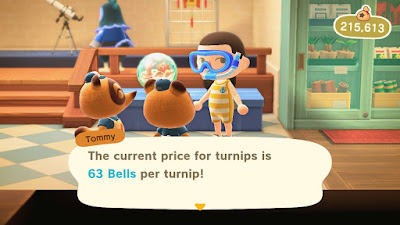 After putting the offer of 63 Bells into the predictor, it increased the chance of this being a decreasing week from yesterday's 27.1% to 42.6%. That is a huge leap and makes me wonder whether it's time to sell.
It is time to sell, but I'm going to stick it out a while longer.
The 'large spike' is now at 54.8%. This is down from yesterday's 69.6%. A 'small spike' is now down to 2.66% from 3.38%.
It does not look good. Again.
I'll get an offer ranging from 57 to 143 Bells this afternoon. My guess is it'll be 58 Bells, but we'll see.
Thursday 9th July PM
This afternoon's offer was 58 Bells. My guess was on the ball.
After putting the number into the projector, there was a huge shift. The 'Decreasing' pattern went right up to 100%.
I was forced to sell the two thousand turnips for a loss of 88,000 Bells.
What another disaster this week turned out to be.
Posted by David Taylor at 12:00 AM