A Post In Which I Draw And Write About Batwoman

Do you think my picture of Batwoman looks bad? 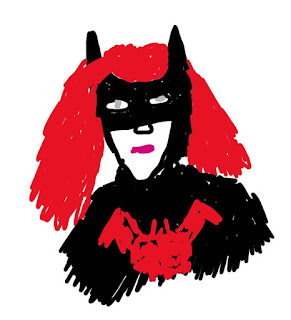 Well - believe me when I tell you it's a masterpiece if compared to my opinion of the television series!
I had a look back at previous posts the other day and noticed that I hadn't written anything about how much I disliked it. I am surprised that I didn't write anything. I looked back through old text messages and emails and I had told friends of mine how much I detested the first few episodes I watched.
I gave up on episode three or four. However, and as I wrote late last year, I had to watch the episode that was part of the Arrowverse Crossover event - Crisis On Infinite Earths.  Other than that, I couldn't tolerate the poor dialogue and stories any longer.
Another thing that turned me off was the way it was filmed. The best way I can convey myself on that one is to liken it to one of those cheap made-for-TV movies. However, I am sure the programme had a large budget, so maybe saying it was reminiscent of made-for-TV movie isn't accurate. It's how it came across to me, though.
As for the acting - there wasn't anything that bothered me that much. I'd have to say the writing didn't help them.
And - after all that - it's time to cover the elephant in the room.
The series' star - Ruby Rose - has sensationally left the role. Therefore, a new person will don the Batwoman costume next season.
I admit, I'm intrigued to see how the producers fix this dilemma.
With that said, I'm absolutely not intrigued enough to sit through another episode. I'll read the reviews instead.
Posted by David Taylor at 12:00 AM