I have been behind on a lot of things today. One of the tasks I kept putting off was writing today's post. I had no idea what I wanted to write about and made the decision, a few hours ago, that - as soon as I was back in front of the laptop - I would write about the first thing that came to mind.

It didn't go to plan. Well, not in the way I had anticipated.

I fired up the laptop and then noticed an email pop up in the corner of my screen. It was an alert from Twitter saying somebody had left a message.

If you've followed professional wrestling for any length of time, there is no doubt in my mind that you would have heard the name Bruno Sammartino.

Sammartino was a huge deal in wrestling. He won the WWWF (it was called World-Wide Wrestling Federation back then) Championship with a victory over 'Nature Boy' Buddy Rogers in 1963. 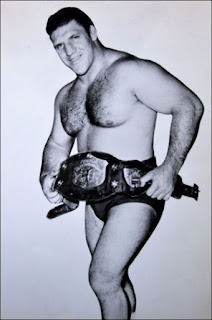 At the risk of not articulating the point across properly - being a world champion in pro wrestling during this period in the industry was a bigger deal than it is today. Titles - and reigns - meant a lot more to the promoter, and ultimately to the consumer. In today's wrestling, especially WWE, you see titles switch hands on a frequent basis.

Sammartino's reign lasted from the aforementioned May 17th 1963 win over Rogers right up to his loss to Ivan Koloff on January 18th 1971.

There was another reign to come.

Sammartino regained the title in December of 1973. Becoming the first-ever two-time winner of the strap. This reign closed three-and-a-half years later following a loss to 'Superstar' Billy Graham on April 30th 1977.

Sammartino was hugely popular with the Italian-Americans on the east coast of the US when the WWWF was based only in that territory.

I always loved listening to Sammartino's stories whenever he would speak with the Wrestling Observer Newsletter's Dave Meltzer. It was fascinating to hear stories of how his family hid from soldiers up an Italian mountain during World War II and how, upon emigrating to the US, turned to weight training and wrestling.

Equally fascinating were his wrestling stories where he recounted all those sellouts from Madison Square Garden and other venues he worked in the territory.

Which leads to the one memory I am sure many fans of contemporary professional wrestling will recall today.

Back during the late 1980s to early 1990s, Sammartino became a huge critic of the World Wrestling Federation and this resulted in a schism between he and the WWF's owners. 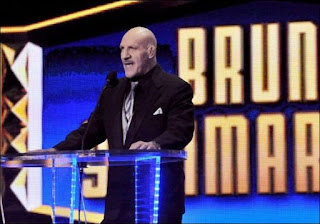 Vince McMahon Jr. and Sammartino were at odds for many, many years. Then - in 2013 - with Triple H as a middle man, Sammartino accepted WWE's offer to be inducted into its Hall of Fame.

I wrote about it in a 2013 post titled 'Hell Freezes Over.' because, well, it was like hell freezing over!

The event was held at Madison Square Garden. Sammartino, just like all those years as champion, was the headliner at MSG.

For one final time.

It was a fitting way for the company to honour its longest-reigning world champion.

A cool moment was - at the end - as all the inductees took a bow, McMahon made his way over to Sammartino and they had their moment of closure.

For fans, such as myself, who knew the animosity between McMahon and Sammartino, this was an added bonus to the night's coverage.

From there, Sammartino did other projects for WWE like being a talking head on some of the company's DVD releases and made special appearances.

The news reports state that he passed away this morning. He is survived by his wife, three sons and four grandchildren.
Posted by David Taylor at 4:37 PM