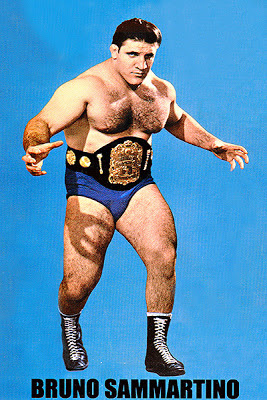 The trick goes like this - I type up a blog post in the evening, set it to publish at 12am and repeat the process the following day. It's to ensure I keep to my one post a day format as well as continuing the run of consecutive posts (don't ask how many, I just know it's been years).

It's a good plan to stick to and keeps this thing going. However, there are days when I regret sticking to this process because news breaks and I have to wait to write about it.

Today, or yesterday by the time this will probably be read, was one of those days.

In what is one of the biggest wrestling news stories in a very long time, Bruno Sammartino and World Wrestling Entertainment announced that the former WWF champion will be inducted into WWE's Hall of Fame this April.

Yes, I know that the WWE Hall of Fame is a work. You don't need to tell me that. I get it.

What I also get is the fact that you cannot have a wrestling Hall of Fame, real or fake, without Bruno Sammartino.

And now WWE has that.

Sammartino  won the (W)WWF championship in 1963 and lost it in 1971. A second reign took place between 1973 and 1977. His first run as champion is still the longest that a champion has held the belt. A record I am confident in saying will not be topped.

Over the years, Sammartino has been critical of Vince McMahon and the WWE product and had always declined the invitation to appear at the Hall of Fame. Triple H worked as the middle man in the current negotiations and managed to get Sammartino confirmed for April 6th.

Throughout Monday's episode of WWE Raw, they kept hyping an 'Epic Announcemnt' regarding the Hall of Fame. I had hoped he would be announced this year and had made it one of my predictions for 2013 at the start of the year so it was brilliant to see them acknowledge him on WWE TV.

It was also great to see the reception the news received when his induction was revealed.

It is fitting that the ceremony will take place at Madison Square Garden as it is the building where Sammartino headlined so many cards as world champion.

STAMFORD, Conn., February 4, 2013 – WWE (NYSE:WWE) announced today that Bruno Sammartino will be inducted into the WWE Hall of Fame at a ceremony on Saturday, April 6, 2013 at Madison Square Garden.

Sammartino, nicknamed “The Living Legend,” is a two-time WWE Champion and the longest reigning WWE Champion in history, holding the title for a combined 11 years. His first title reign began on May 17, 1963, where he defeated “Nature Boy” Buddy Rogers at Madison Square Garden. After losing the Championship in 1971, he regained the title on December 10, 1973, defeating Stan Stasiak at Madison Square Garden, holding the Championship until April 30, 1977. When he retired from the ring, Sammartino became a color commentator for WWE’s syndicated Superstars program and stepped back into the ring on special occasions. After his departure in 1988, Sammartino was openly critical of WWE, and for many years declined the offer to be inducted into WWE’s Hall of Fame, citing concerns with WWE’s content and culture.

“For my fans around the world, I am pleased to be joining the WWE Hall of Fame, especially at Madison Square Garden,” said Bruno Sammartino.

“Having sold out more than 200 shows at Madison Square Garden and being the longest reigning WWE champion in history, Bruno Sammartino is truly ‘The Living Legend,’” said Vince McMahon, WWE Chairman and CEO. “This is an extraordinary and historic moment to have Bruno take his rightful place in the WWE Hall of Fame.”
Posted by David Taylor at 12:00 AM