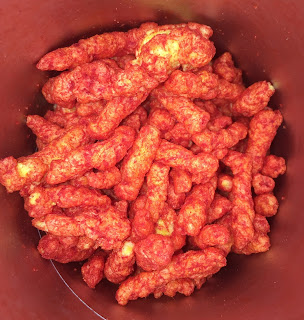 Remember the other day when I wrote that I had purchased three tubs of Cheetos on Amazon Prime Day?

They arrived yesterday afternoon. I was aware they were the spicy version of the snack from the start. However, I didn't know they were going to be THAT spicy.

I have eaten, at the very most, four in total. They are disgusting!

They have a spicy version over here in Europe that isn't as hot. I assumed they'd taste identical. I won't be making this mistake again.
Posted by David Taylor at 11:25 AM