What a bloody day yesterday was.

I woke up and went out before catching WWE Raw and Monday Night Football, so made a point of avoiding Twitter and news websites. I returned home a short while later, watched the game and then caught Raw. 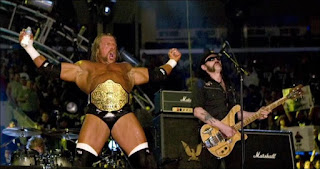 Recording Monday Night Raw is the only way to watch the programme for me. The fast forward button is my best friend.

Anyway, I got to near the end of the episode and saw something about Motorhead's Lemmy. I rewound and hit play.

Michael Cole, JBL and Byron Saxton were paying tribute to the band's frontman.

Lemmy was mentioned on Raw because he had written a number of WWE themes over the years. The most notable were Triple H's two theme songs (The Game and King of Kings) as well as one of my favourite themes ever - Line in the Sand. The tune Evolution used to come out to back when they were a thing.

Motorhead's Ace of Spades was even used as the theme of the most recent NXT TakeOver show from London and it's that song that will remind me the most of Lemmy's work.

The first time I heard it, however, was not when it was being performed by Motorhead. I used to work in a pub during summer holidays and one of the rooms had live bands every weekend. It wasn't my kind of music, but there were two songs that I loved the bands perform and they were Ace of Spades and Black Sabbath's Paranoid.

Whenever I hear either song, memories of those summers flood back.

The day became even more rubbish when I read that Pavel Srnicek had passed away.

Srnicek was the goalkeeper of the Newcastle United team that came so close to winning the title in 1996. Yes, twas the season when Kevin Keegan had his 'I'd luv it!' meltdown.

To this day, the Keegan-led Newcastle team are my faves of all time.

I had read that Srnicek had suffered a heart attack and was in a coma. I didn't even consider the possibility he would die. I must have teased myself into think he was fit and young(ish) enough to pull through. Unfortunately, the subconscious hope was not to be.
Posted by David Taylor at 12:00 AM