The Treat That Turned Into A Trick

It was meant to be a Halloween treat. But, I'm afraid to inform you, this is nothing but the ultimate trick.

And it isn't my fault.

You see, a number of months ago, I came across a movie that I thought would be perfect to watch and 'review' for the Halloween-themed post of this year. This movie was selling for five pounds on Amazon and it was perfect on so many levels. I had a huge idea for this year's Halloween post, but I put it on hold.

I just had to watch this baby... 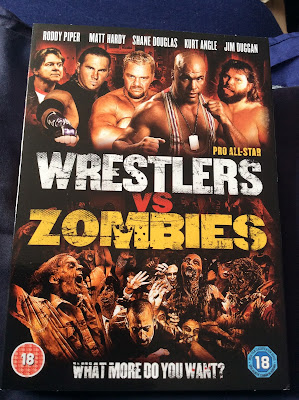 Pro All-Star Wrestlers .vs. Zombies. I had to halt the plan, right?

As noted, the film arrived over the summer and I waited until just a few weeks ago to sit down and view it.

I tuned in and sat there for thirty minutes before realising that I couldn't cope. Ninety minutes - or however long it was - was too much for one sitting. I had to cut it down over a few days.

But then the days turned into weeks. And we're now on Halloween morning and I still cannot push myself to watch this... crap.

The story went like this: Shane Douglas kills a wrestler in a match, the wrestler's brother who is Russian or Scottish (if we're to go by what he says I think it's Russian, but the accent sounds Scottish) decides to get revenge on Douglas by booking a wrestling card where his zombies can attack the wrestlers.

I know this sort of genre of movie has its cult following and I really should have embraced it considering it involved a form of entertainment that I am a passionate follower of. I'm sorry, I couldn't.

The acting was abysmal, the story was absurd. Everything about it was a nightmare. Give me Troll 2 any day.

Without seeing the end, I guess the babyfaces went over. I don't care enough to find out.

The tag line on the cover writes 'What More Do You Want?'

For me to have not come across this would be a good start.