A Nostalgia Trip On Karts

I took my Super Nintendo Classic Mini out of its box for the first time in a while this afternoon.

There was a very good reason why.

For today is my thirtieth anniversary of playing Super Mario Kart for the first time.

I wrote about Boxing Day of 1992 in a post written on April 7 2008. In it, I noted about how a couple of friends and myself made a trek into the City Centre of Cardiff to spend our Christmas money.

To show you just how much times have changed since then, we got to our destination only to realise that the shops were closed. We then decided to shift our journey to the outskirts of town and gambled on the electrical goods store - Comet - being open.

Our gamble paid off.

My memory of the Comet visit goes like this: I had no intention of buying Super Mario Kart for my Super Nintendo. However, my two friends picked up copies for themselves and it was kind of a 'if you can't beat them, join them' deal.

All three of us left the shop with our own copies of the game.

I also recall having to go to church later that day (it was a Saturday). I remember it because I had to phone home from a phone box (another sign of a different time) and tell my mother I would meet her in the church rather than go home only to head back out towards the way I had came from.

One problem: I got there earlier than I should have. Did I do what other early birds were doing and kneel down in prayer or sit reading the newsletter? Of course not - I opened up the box to the game, pulled out the instructions and read that instead.

It was at that point, I couldn't wait to get home and play it.

I went off from starting the day with little interest in the racing game with Super Mario Bros. characters to owning a copy and having to endure a post-Christmas church service.

When I finally got around to playing it, Super Mario Kart became one of my favourite SNES games. It's always one of my go to fixtures whenever I am in the mood for some retro Nintendo gaming.

My love of the Mario Kart franchise has expanded over the years. I was awestruck when I bought Mario Kart Wii because it allowed me to play against people from all over the World - something I could only have dreamt about thirty years ago.

And then, almost five years ago, I purchased the Nintendo Switch version. It was a tad better than the Wii edition.

I could have picked any edition of Mario Kart to play today to celebrate thirty years of racing. However, there was only one version I opted for - I went old school. 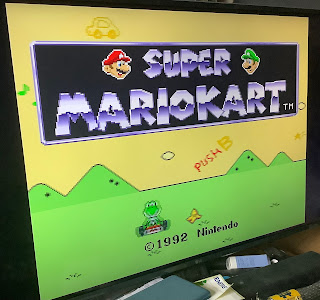