Here is the twelfth edition of 'Rating Drink Powders'.

In this series of posts, I take a handful of drink mixes that can be bought online from websites that imports American food and drink then I taste and rate each one. 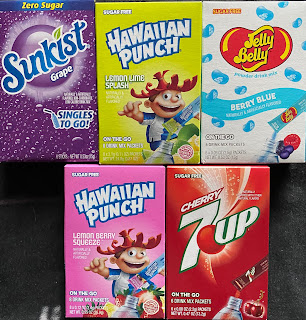 Sunkist Grape
I have tasted drink mixes from Sunkist in previous editions of Rating Drink Powders. The 'Lemon and Lime' variety scored three stars and the 'Red Punch' picked up four.

Grape is one of my favourite flavours whether it be in sweet/candy form or in drink, so this could be a higher scorer.

I've just put the powder into bottle and it does not really give off a grapey smell that I am used to. After shaking the bottle, I can actually catch a mild smell.

As for the drink itself - well, it does have a grape taste. However, it is reminiscent of Hi-C Grabbin Grape, which was quite weak scoring average marks.

The liquid has a luminous green colour and looks quite snazzy, if I say so myself. As for the taste - it is not weak at all. That's a plus. However, there is a slight bitterness after the first sip. I didn't get the same sensation after the next few sips.

Initial aftertaste aside, I think this is quite nice.

Berry Blue smells very strong. The first thing I thought when the scent came to me was blueberry pie. I think this could be a good one..

..damn. No, it's too watery. The taste does hit you, but it's as an aftertaste. This is quite a letdown because I thought it had a chance of being strong.

It was nowhere near as nice as the Hawaiian Punch I tried above. At least that one had a lemon flavour!

Cherry 7-Up
Another 7-Up flavour after the regular lemon and lime flavour scored three stars last month.

It's very nice. Not as good as some of the other cherry-flavoured mixes I've tried. However, I have to score high because the cherry edition tastes a lot more like the real Cherry 7-Up than the lemon and lime mix tasted like regular 7-Up (if that makes sense).

If I gave the regular scored three, I have to go higher with cherry.

And The Winner Is...
Looks like I kept the best 'til last because Cherry 7-Up was the winner of this edition.