A Double Bill For Christmas Eve

Today is going to be a big one for television.

Talking Pictures TV to be specific.

That's because the film channel has TWO classics that are worth watching for contrasting reasons.

At midday, the channel is airing one of the worst Christmas film I have ever seen.

Santa Claus Conquers The Martians was one of the films I watched in the Fifth Annual Diet of Christmas Films ten years ago.

Then, at 4:10PM GMT, it has a film that has haunted me ever since I came across it when I was (at most!) four-years-old.

Lost in the Desert, or 'Dirkie' as it is called in other regions, is a South African movie - made in 1969 - about a young boy and his dog who survive an airplane crash in the desert and must find their way to safety.

As I wrote above, I first watched this film as a child. It was on TV one afternoon either after school or on a weekend. I vividly recall being scared at some of the scenes. I was reunited, in a way, with the film nearly five years ago when I watched it with adult eyes for THIS POST.

I highly recommend catching Lost in the Desert. It wasn't just me it has left a mark on. You can do searches throughout the Internet and come across many who have shared similar memories of the film.

I'm so glad that Lost in the Desert is on TV again. I had requested it to the people at Talking Pictures TV because I had seen that the channel had broadcasted years ago. I can finally record it and have it stored on my cable box (and flashpen for my TV on Freeview) and will be able to watch it again and again. Until, of course, when the box and TV finally becomes obsolete. 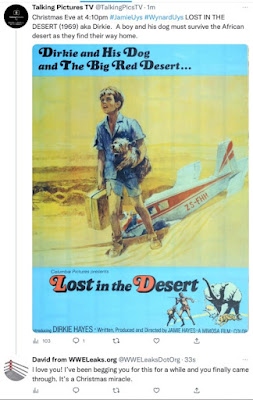