When I was looking through The Sun website yesterday afternoon, a story about McDonald's caught the side of my as I scrolled through the main part of the website.

I don't know which words forced me to stop and take notice, but - from the gist - I saw that people had been complaining about the new menu items.

'Ah.. they're talking about the Spanish Fruit Punch,' was the first thing I concluded. After clicking on the article, I realised that it was concerning the Spicy Spanish Stack burger.

I haven't tried the Spanish-themed burger, but I've tried the drink. And I did not like it at all.

It was full of ice (as expected). However, the ice took away most of its flavour. I could not taste a thing but ice and a mild hint of red fruit.

I suppose it may have just been I was given a drink that was too diluted due to an abundance of ice.

One thing is for sure: I won't buy another one. 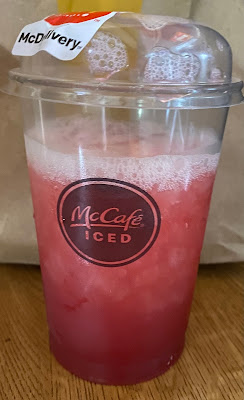