I placed my annual season handicap bets yesterday, so thought I would share with you what I've gambled on.

If you've ever read one of the Season Handicap Betting posts in the past, you should be aware that I often take a special approach to picking the teams. This involves using the season guides that appear in the Racing and Football Outlook newspaper as well as using my spreadsheets.

When I bought the RFO issues last year, I noticed the write-ups had changed significantly. This meant that I had to change things up. I have expanded on that in 2022 and decided that - for now - I will no longer use the Racing and Football Outlook to help me.

The method I will use going forward is to simply use the average points per position that I have always done and then simply put each team in the order they appear in the betting. Therefore, if Team 1 is the favourite it will go at the top. The team at the foot of the market will obviously be added to the bottom of the table.

With all the teams added to each list, I join up their handicap points to the average points that are accumulated for the respective positions and then sort the list to see which teams are near the top.

For example, in League Two - the team which has finished top has done so with an average points tally of 88. In the betting, Stockport County is favourite to win the league and has a zero points advantage over the other teams in the season handicap market. Therefore, 88 + 0 = 88 for Stockport.

League 2
Stockport turned out to be the top team when I applied all the average and handicap points to the League 2 predictor. Next up, behind Stockport's 88 points, is Bradford City which has 86 points (84 average points per its predicted 2nd place finish and +2 for the handicap).

I'm not picking either Stockport or Bradford in my bet. I'll explain why below. 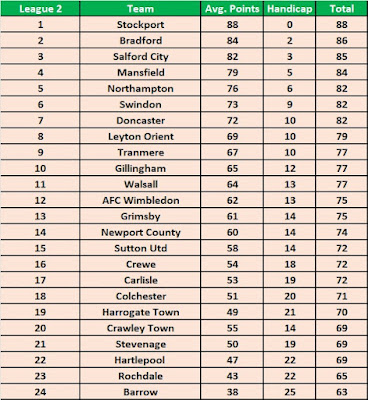 League 1
Another favourite found its way to the top of the League 1 season handicap predicted table for 2022/23 with Sheffield Wednesday having 94 points (94 is the average for the first place finishers and the bookmakers have given the Owls a zero-point head-start). 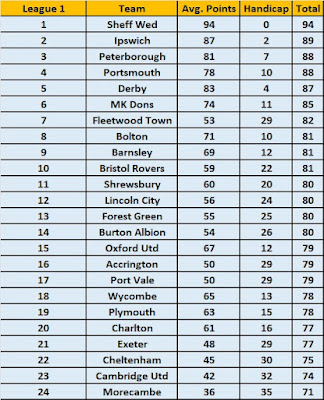 Championship
Yet again, there is another team with a +0 head-start sitting atop the prediction table. In this case, Norwich (93 points predicted finish) is above Watford, who are on 89 points (87 predicted finish for a second-place team in the Championship plus +2 head-start). 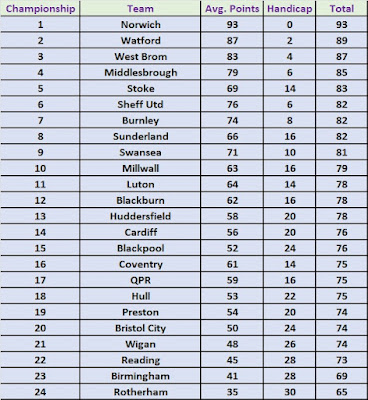 Premier League
The Premier League predictor gave me more interesting results with Newcastle and Everton both at the top of the division with 90 points apiece. The bookies have given the former a handicap of 31 while Everton gets 44.

Manchester City is in third (or second if we consider the top two to be a tie!) with +0 added to the eighty-nine points average that the top team in the Premier League has averaged over the past few years. 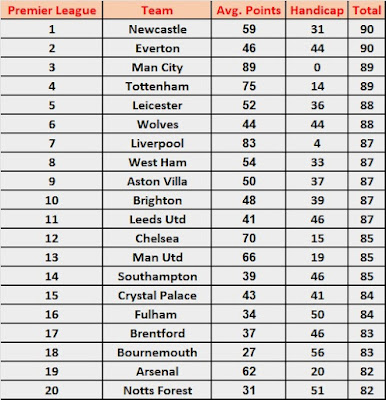 My Bets
This approach may need to be tweaked once again. I dislike taking a handful of teams with zero points for my each-way bets, so I've opted to handpick one of the top four in each league.
For League 2, I've gone for Salford City +3. I couldn't help but go for the ten point start for Portsmouth in League 1. I've selected Norwich with the +0 in the Championship and then - in the Premier League - I think it was worth taking the +31 with Newcastle.
Here are the final picks. I've put them in an each-way single and also done them in a small stakes Lucky 15.
League 2: Salford City +3 18/1
League 1: Portsmouth +10 18/1
Championship: Norwich +0 18/1
Premier League: Newcastle +31 15/1
Just like all other Season Handicap posts in the past, I always close by pointing out that I do these annual wagers for fun. I lose a lot more than I have ever won doing them. The main reason why I do them is to have something to keep tabs on during the season for, as they say, entertainment purposes.
I aim to return to this topic next summer once the seasons have concluded.
Posted by David Taylor at 12:00 AM