You can tell the NFL season is on the horizon when the most random news story pops up and I get fairly excited.
In last night's case, it was finding out that the Cincinnati Bengals are planning to play using white helmets with tiger stripes this year.
The team's colours are orange and black. Their helmet is orange with tiger stripes to play into the 'Bengal' name.
I love the idea of the team occasionally playing with in white with tiger stripes.
The new helmets have been given the okay by a new rule which has allowed teams to produce new designs for the headgear.
Houston was the first team to take advantage of the new approach by the NFL and has unveiled a 'Battle Red' helmet which will be worn when the team meets the Philadelphia Eagles on November 3rd. 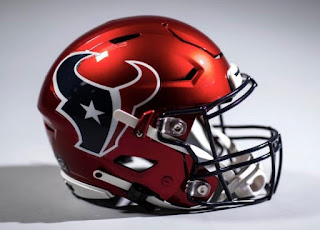 Unfortunately, the Bengals haven't published any pictures of the white and tiger striped helmet. Yet.
Posted by David Taylor at 8:14 AM