I have a somewhat funny follow-up to something I published yesterday.

In the post, I mentioned how surprised at the number of people, or gamblers, who were complaining about the betting result of Real Madrid's over-time victory over Manchester City in the Champion's League semi-final from Wednesday night.

As I pointed out, bets are graded on what occurs during the ninety minutes (plus stoppage time) of the game. Anything beyond that, either by extra-time or penalties, does not count.

I suggested that those gamblers should know the rules of their bets before they strike them.

Shortly after putting the post out there, I returned to the book I am currently reading - 11/22/63 by Stephen King - and came across an interesting scene.

To cut a long story short, the time traveller in the novel needs to find funds in the late 50's and early 1960's. One of his methods of income is to gamble on sports he knows the actual results of.

A line, said by his bookmaker, which stood out to me reads 'I just like to get the terms of the wager straight'.

Of all the moments to come across that part of the story, it came on the day I had written about rules and terms of betting.

It's a funny old world. 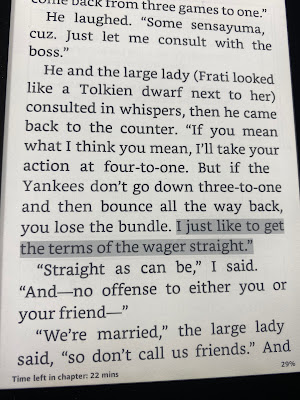