Just like with last year's launch of GB News, I had been keen to see how Talk TV made its debut when it began airing last night.

The new channel, which is a simulcast of the Talk Radio station which has been on air for years, started off in a similar way to GB News because it had sound sync issues.

Those problems were immediately fixed. However, I was somewhat busy to continue watching past its initial few minutes.

The channel kicked off with some hard hitters, though. Last night's schedule had Piers Morgan beginning his new programme in the second hour. Morgan was followed by Sharon Osbourne an hour later.

I recorded the start of the channel, so was able to catch the first few minutes of Piers Morgan's show. He - just like Andrew Neil and Dan Wotton, on GB News' birth, set his agenda from the off: the programme would not be for 'woke snowflakes'. 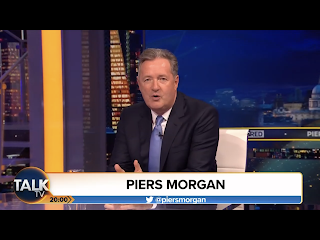 Piers Morgan is like Marmite. Some might call it being a shit stirrer. I am keen to see how his association with the channel develops. He is, without question, Talk TV's top draw and I feel its success - as a TV product - is on his shoulders.

That was the date when I first tuned into Talk Radio UK on its debut night. That station eventually morphed into TalkSport by the end of the 20th Century. Then, somewhere along the way - during the age of digital radio - Talk Radio came along as TalkSport's 'sister station'. And now we have what I would call a rebrand of sorts with 'Talk TV' being the televised arm of Talk Radio.

The reason why I mentioned the brief history of Talk Radio UK - and how I began following it from the start - is because last night reminded me of something.

Talk Radio UK also began with some big names. When ratings didn't go the way the top brass had hoped, some of those hosts found their way out of the door long before Talk Radio UK celebrated its first anniversary.

Will Piers Morgan and Sharon Osbourne make it to year two?

It's sure going to be interesting to see how this plays out.