So, I Watched Night One Of GB News And...

I remember the early days of the BBC News Channel. There seemed to be  technical hiccup upon technical hiccup from launch day and, even on the odd occasion, I still find come across some sort of blip while watching the station even though it has been on air for well over twenty years now.

The memories of the early days of the BBC News launch came flooding back when I found out that a new news channel was on its way in the form of GB News. 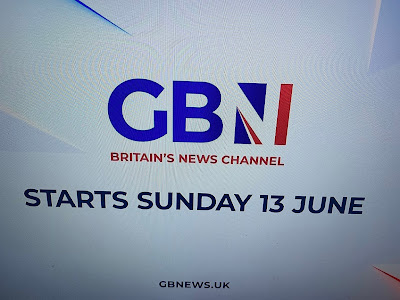 The 'right leaning' channel began life on Sunday and boy did it have some hiccups and inane questioning by one of the presenters.

The launch kicked off with the channel's chairman and presenter, Andrew Neil, issuing a mission statement. After his opening piece he introduced his colleagues.

The picture was quite blurry. To make matters even worse - Neil's voice did not correspond with his lips. The sync issues seemed to ease as the opening show continued. However, the first person Neil introduced didn't have his mic working properly and they had to halt their talk while that was dealt with.

The cringe continued later when - during Dan Wootton's show - he asked Lord Alan Sugar whether he has 'taken the knee'.

I laughed out loud at Sugar's response. The interviewee thought it was a ridiculous question to ask.

It would be unfair of me to say night one was a bad start because history predicted there would be blips. I tuned in yesterday afternoon for only a few minutes and the hosts were having issues trying to link to a guest. They seemed to struggle filling in the dead air and talked over each other.

Was it a case of me catching them at a bad time or did the gremlins continue into the second night? I guess it's the latter, but I can't be sure.

Unless I watch some more.