I watched the funeral of an online friend on Monday morning and something quite peculiar occurred.

During the service, I had a notification that an email from Amazon - with its daily eBook deals - had arrived. I took a glance at what was on offer and noticed Arsene Wenger's book was on sale for 99p.

I'm not an Arsenal fan, but thought it might be worth a read so purchased it.

It then dawned on me that, not only had I technically bought a book during a funeral service, I had bought a book about a person tied to Arsenal Football Club during the service of a Spurs fan.

I'm sure he would have found the funny side. After all, I had pranked him a little over a year ago when I sent him an Arsenal birthday card.

As the ceremony proceeded, there was a story about Gino having purchased a cook book by the Hairy Bikers. It was at this point I was stunned.

Right next to Wenger's book - in the email - was a title by the aforementioned chefs. How uncanny! 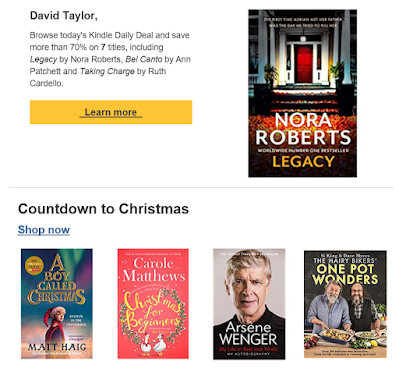