I'm sure I've written the next sentence at least once in the years I have been blogging here, but I will do so yet again - just to make sure:
Slush Puppie is the best slush drink brand out there.
Especially its blue raspberry flavour.
I grew up on the icy drink. Well - in moderation. And only during hot weather. But, still - it was Slush Puppie all the way. Yes, I would sample random - now forgotten - brands but Slush Puppie was king.
It has been a very long time since I've came across a Slush Puppie machine in the shops that I've visited. However, when I was doing an online Iceland grocery order a few weeks ago, I saw the iconic logo and dog.
Before me were two ice cream tubs. Both with the Slush Puppie branding. One was for a strawberry flavour - 'Strawberry?' I thought - while the other was for what I would consider a proper Slush Puppie flavour - blue raspberry.
The tubs were in an offer. Two for £5. I just had to buy them. And so I did. 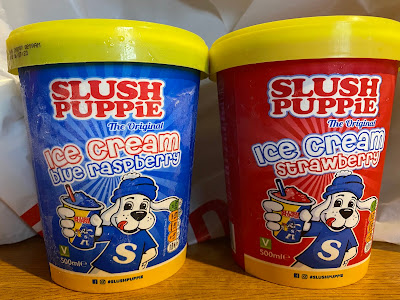 The first flavour I sampled was the strawberry. And there was a reason behind that. I wanted to leave what I hoped would turn out the best until last.
To me - strawberry is not a real Slush Puppie flavour. Back in my day, and possibly even on this very day, a red Slush Puppie is cherry. There was no strawberry when I grew up. It was always blue raspberry, cherry, cola and lime as far as I'm concerned.
As for the strawberry ice cream - it wasn't bad. I couldn't really compare it to the flavour of a strawberry Slush Puppie, but - to compare it to a regular strawberry ice cream: it had a decent flavour and the texture was nice. It resembled a sorbet in ways.
The main event was always going to be the sampling of the blue raspberry flavour.
Just like the strawberry variety, the blue version was similar to a sorbet. As for the taste of it - yes, it very much brought back memories of childhood sipping those drinks from the Slush Puppie paper cup. To be even more honest, the taste initially took me back to this summer when I tried the blue raspberry Starburst drink powder. 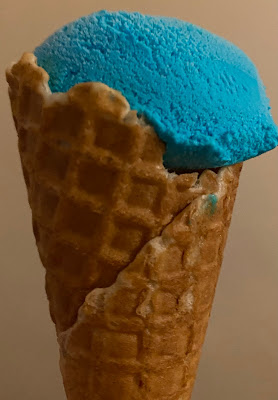 Blue raspberry did in fact turn out to be the better flavour. Unsurprising, I know.
It could have been a more intriguing head-to-head had the people who branded the ice cream decided to launch cherry instead of strawberry.
Or how about cola or lime varieties...?
Posted by David Taylor at 12:00 AM