With Halloween falling on a Sunday this year, I decided that I would publish something at 11:59PM on the Saturday due to Sundays being the day in which I publish a post sharing my daily fantasy football team.

Traditionally, I would write about a horror movie - or movies - I have watched in preparation for October 31st. However, one of the plans I had in mind met a roadblock of sorts when I was sent DVDs that wouldn't work in my player.

But not in the way you would initially guess.

I have written in the past about Halloween III: Season of the Witch. I first came across the movie in the 1980s when it aired on the BBC. Many of the my classmates in my junior school class also watched it. Or rather, we had it recorded and watched it after it aired.

On October 31st of 2006, after spending the day in court as a witness, I came home and spent the evening watching a DVD of the film. I was somewhat taken back by how much the film didn't hold up all those years later. Now - with years removed from the 2006 reintroduction - I have watched the film many times since. My love for it, for what it is (and what it was to my childhood), has long since been rekindled.

With the movie being forty next year, I thought I'd read the novelisation which came out in 1982 when the movie was released. 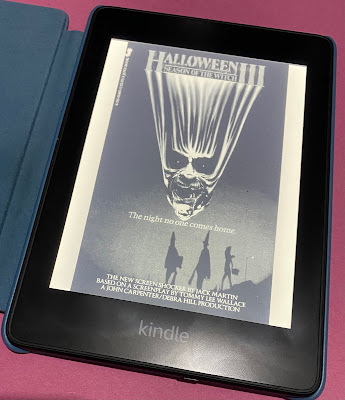 The book was written by the late Dennis Etchison under the pseudonym of Jack Martin.

As of the time of writing the post, I've almost finished reading the book. I strategically timed it so I'll finish it on Halloween itself.

I've enjoyed the novel. With it being a book based on the movie, the author has taken advantage and allowed himself to add some additional scenes into the story. Having seen the film many, many times, it's like seeing a director's cut or a DVD extra with deleted scenes. But in book form.

There are also parts of the book where I have found myself asking 'is this in the film or not!?' That isn't a complaint. 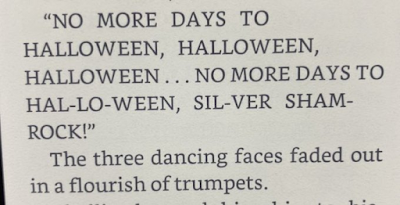 If you're a fan of the movie, I would certainly recommend checking the book out because of the reasons I explained above. Expect to pay over the odds for a physical copy, though. As of today, one third-party seller is looking for £45. Crazy!