On June 23rd, I published a post titled 'Over 10 Years Later' in which I wrote about buying an Amazon Kindle for the first time ever.

As the title suggested, I had spent over a decade deciding whether or not to buy an e-book reader and - after coming into possession of some books about professional wrestling that were on a reading wish list - I thought it was time to finally make the jump.

I closed the aforementioned post with a promise that I would write a follow up when the time was right. Well - after close to eleven weeks of use and with nine titles read - now is that time. 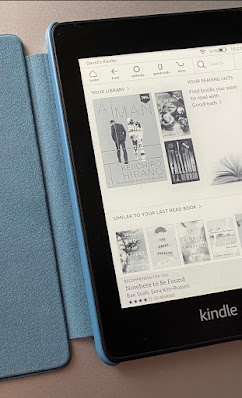 To cut to the chase - I am a fool for taking this long to buy an Amazon Kindle.

Back when I first started entertaining the idea of owning one, the devices would have been in their infancy. Therefore, I might not have ended up enjoying them as much as I have found pleasure in using the Paperwhite model.

Even so,  I still shouldn't have waited so long to get one!

When I first purchased the reader, a friend of mine told me about getting the daily emails from Amazon which promotes the e-book deals of the day where you can find titles for 99p. I gave that a go and ended up filling up my library with some decent books that I would never have even bothered with usually. One book, for example, was great. It's easily up there as being one of the most enjoyable stories I have ever read.

I did reach the point where I was buying 99p books frequently and knowing the 'to read' pile was getting uncontrollable, so I made the decision to delete the emails before I got to read what was on offer. I have since resumed normal email reading service and have only bought one book for 99p since.

The book I mentioned as great is The Toymakers by Robert Dinsdale. When I purchased it for 99p, I was given the option of also buying the audiobook format for a little over three pounds. Figuring that the e-reader allows you to add audiobooks to listen to via Bluetooth, I thought I'd buy the audio format as well just to test it out.

I did not enjoy the experience of listening to the audiobook. It was possibly due to error on my own part, but I found it difficult to sync the book up to where I last finished off reading and vice versa. It became a pain that made me realise that - if I were to ever try an audiobook again - the best course of action is to just have the audio format and not jump from audiobook to e-book depending on mood.

I have not added books to the kindle by using the cable that comes with it. However, I have done so by emailing the files to my own Kindle address. I instantly get a response from Amazon asking to authorise the addition of the new file and then it arrives quickly.

The speed of navigation on the Kindle, when you're not reading a book could be better. But it isn't a deal breaker for me. The speedier Kindle Oasis is possibly out of my price range, but I would seriously consider getting the top of the range edition whenever it's time to make a change. That is hopefully going to be a very long way off, though.

When I bought my device, just like with everyone else, I was offered the option to pay an extra £10 to have the Kindle without adverts. You can still do this after purchase by a setting on your Amazon account. The advertising appears on the screen when the device is in sleep mode. Coming from someone who always fast forwards through the commercials on recorded TV programmes, I'm going to surprise myself with what I am about to write:

I have no desire whatsoever to pay the extra tenner to take the adverts from my device.

The advertising never gets in the way and has worked by piquing my interest in one of the new books it was promoting over the summer (The Castaways by Lucy Clarke). I'm sure there will be other adverts in future that will introduce me to new titles.

I still love the smell of fresh books and will always prefer physical over digital, but I am very happy with my Kindle.

To close, here are all of the books I've read so far:

There are many more on my Kindle's to read pile, which is ironic considering one of the main reasons why I chose not to buy an e-book reader for over ten years is because I have far too many physical books piled up waiting to be read.
Buy An Amazon Kindle Now!
Posted by David Taylor at 12:00 AM