It'll need an iron, because it has been in the bag it arrived in earlier this year, but below is the t-shirt I'll be wearing once I wake up later today. 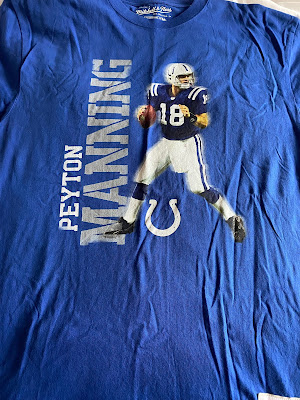 The reason why I've decided to wait until today to wear the tee will not be a surprise to those who follow American football.

Peyton Manning will be inducted into the Pro Football Hall of Fame later today.

I've written countless times over the years, especially during his playing career, that Manning is my favourite player of all time. Even to this very day, I will die on a hill claiming that he is the GOAT.

Seeing as it's a day I'm wearing a throwback Peyton Manning t-shirt, I think it's worth doing an equinoxx.info throwback and looking back at the post I wrote days after Peyton Manning sent me an autograph which is still my favourite memory from all these years following the sport of American football.