In yesterday's post, I wrote about buying a 'share' in the new Cadbury's Wispa Gold promotion and thought I'd do a short follow-up to show how I have - for want of a better word - 'invested' in the nine-day event that is running on Twitter.

Each day at 12PM, the official Cadbury UK Twitter account will reveal the price of one of its shares in Wispa Gold Hazelnut. I am planning to keep track of the highs and lows over the coming days.

The first announcement was revealed yesterday when the price of a 'share' was announced as three bars. I have added the result into a spreadsheet. You can see it below. I'll continue to keep tabs until the promotion closes next week.

Whatever the price is at 8PM BST on Friday September 3rd, shareholders will be sent that amount of the new product. 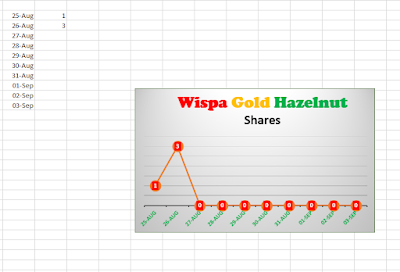