This might be the last '...Mag of the 2021 Season' post of the year because - as it stands - the collection of NFL annuals, that I have been collecting throughout the summer, may be complete. 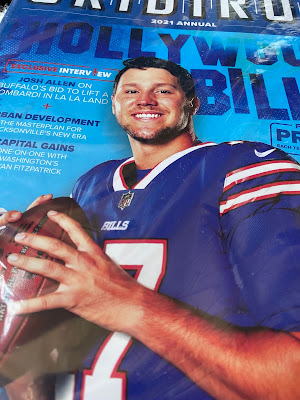 The Gridiron Annual for 2021 came with the post sometime last week and I've been taking it in ever since.
This magazine is published in Britain and its editor is Neil Reynolds, who helms Sky Sports NFL coverage over here.
Reynolds has a lot of knowledge about the sport and it shows with his write-ups for all thirty-two teams in the league.
Another thing that Gridiron is good for - with Reynolds working as its writer - is that his connections allow for interviews with some of the big names in the NFL. This year's cover star is the Buffalo Bills' quarterback - Josh Allen - who has been performing well for the team and is obviously looking to improve on the 13-3 he and the team achieved in 2020.  He is interviewed by the magazine editor.
Also in the preview book is an interview with the Jacksonville Jaguars' new head coach - Urban Meyer. Another example of Reynolds picking a subject who will likely have all eyes on him in 2021.
The most positive thing I can say about this mag is it's not only suitable for people who are veteran followers of the sport. There is a page or two with the rules of the game which proves - to me - that can be used as a welcome guide to people who may be visiting American football for the first time.
A wall chart is also included for those who would like to follow each team's schedule during the regular season. I am certainly going to use it, but - as of right now - I am struggling to decide where to put it! 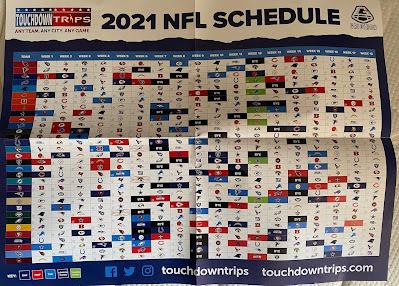