Earlier this year, I tried an American candy called Twizzlers for the first time.
Twizzlers is one of the US' oldest confectionaries. It's a licorice product and is available in different flavours.
I had cherry.
I wasn't keen.
Fast forward to a fortnight ago - I was looking on the Costco website and came across a box of something called Red Vines.
They looked like red licorice just like Twizzlers. Remembering how much I wasn't fussed on Twizzlers, I decided to pass.
But then a thought hit me.
This might be the only opportunity you'll get to buy a jar of Red Vines from Costco
So, I took the plunge. 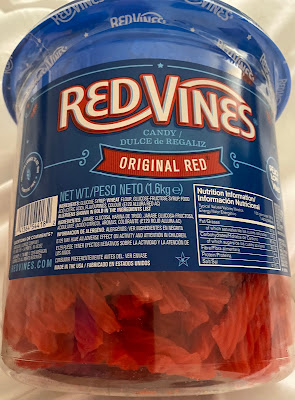 The huge plastic jar arrived a couple of days later. I put it away for a few weeks because I had other treats to get through in the meantime. However, I did read up on them.
There seems to be a divide between fans of Twizzlers and supporters of Red Vines. I noticed this while looking through Twitter one night whilst attempting to kill some monotony.
Now, weeks later - I've decided to do a 'live' blog.
What I'm going to do is open up this plastic jar and take out one of these candies and see which team I am on.
Remember - I did not like Twizzlers, so this might be an easy win for Team Red Vine.
And so.....
....
...............
.............................
I'm on team neutral.
Red Vines and Twizzlers, despite being opponents, have some similarities.
They don't blast your tastebuds with any flavour. They're both just meh.
Give me a Bebeto Strawberry Trunk any day.
Posted by David Taylor at 7:00 AM