Taken For A Ride By A New Literature Pilot

If you read last Wednesday's post, you'll be aware that I finally gave up my over ten year fight with myself over whether or not to purchase an Amazon Kindle.

To cut a long story short - my real bookshelf is constantly filled with titles. The First In, First Out system is non-existent and I would always conclude that I would buy an Amazon Kindle on one of its promotion days when I got on top of my to read pile.

That was the plan. I didn't envision getting my hands on e-books of titles that I've wanted to read since being a teenager which more or less forced my decision-making hands.

So - if you've read last Wednesday's post - you'll know that I finally bit the bullet and entered the digital reading world.

What I didn't tell you is a friend of mine gave me some hints and tips about what she does with purchasing books on the Kindle.

I took her advice in, but I made the declaration that 'I know exactly what I'm buying first.' 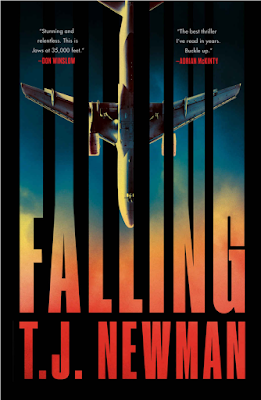 I believe Waterstones emailed me a couple of weeks ago with its monthly recommendations. Falling by T.J. Newman was the novel that was promoted most prominently. I wish I hadn't deleted the mail because I could point out exactly what sold me on it.

The gist is, the email asked something along the lines of: 'you are an airline pilot and your family is being held hostage by terrorists back at home. You have one of two choices: crash the plane or your family is killed. Which do you choose?'

That was a tense enough dilemma. I was - if you pardon the pun - on board.

I didn't know anything about the author going in other than Falling was their debut novel. While reading it, I came across a lot of detail about airlines and could sense that 'this guy must really work as a pilot. Either that or he has done an incredible amount of research.'

I was half-right, yet completely wrong.

The author did indeed work in the airline business. SHE worked as a hostess.

My subconscious chauvinistic prejudgement being kayoed after reading the 'About the Author' section at the end of the book was the final surprise in what I thought was a great story.

As noted, the novel's premise places the protagonist - Bill Hoffman - in charge of his jet on the way to New York City while his wife - Carrie - and their two children are being held hostage back home in LA.

Hoffman is ordered to continue his ride, but - when the time comes - he has to murder his co-pilot, gas the other people on the flight and then divert the plane to Washington, DC with the plan to then crash.

Or not do that and have his family murdered instead.

At the risk of giving away any spoilers, so please excuse my vagueness, there are lot of thrills and spills in this journey Newman pilots.

There was one twist I sensed, yet - when it happened - I still ended up stunned because my suspicion had been eased away shortly before the revelation.

Another swerve had me shaking my head with an 'okay, you got me' smile on my face.

I absolutely chose the best book to introduce me to the Amazon Kindle. I know it's cliche, but I couldn't put the book Kindle down.

Once I had finished reading the book, I did what I usually do and searched for podcasts that may have reviewed or discussed Falling.

My search resulted in finding an interview with the novel's author. In it, she stated that the publishing deal she has is for two titles. I welcomed that news because book one is absolutely a Yankee Stadium home run and I'm keen to see what her next novel is about.