Amazon Prime Sport's Twitter handle gets the award for being the first person/thing to bother me today.
Look what they just tweeted: 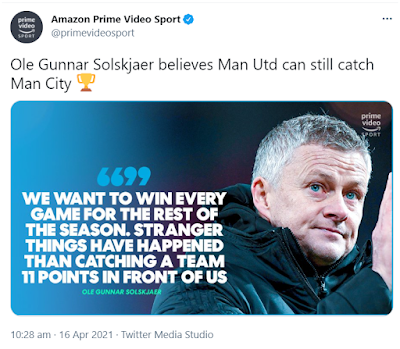 Ole Gunnar Solksjaer must have said that during a recent press conference or post-match interview. Amazon is running with it to get a reaction from its followers.
Of course Manchester United isn't going to catch up with Manchester City. Not this late in the season. However, the manager has to say the right things to inspire his players. Most importantly, if he were to throw in the towel right now, how would that look to his employers?
You play to the whistle. The season isn't over. Not yet. The odds are not in their favour, but the slim chance is still there. You admit defeat when you've lost.
Also - this is the same Solksjaer who joined a Manchester United team months after it won the Premier League title in 1995/96 after a late-season collapse by Newcastle United which had a twelve-point cushion at the top of the league in January of '96.
He would have heard all about that.
Posted by David Taylor at 10:54 AM