An Offer I Certainly Can Refuse

I keep seeing commercials on TV for an app in which you can scan ISBNs and barcodes to see how much you can sell unwanted books and CDs.

After seeing the ad enough times, I decided to try the app out. I knew just the book to try out.

Gary Hart's autobiography - one of my favourite wrestling books - has sort of become a collectors item because it is no longer in print. If you look at Amazon.com you'll see that third party sellers are trying to sell copies for ridiculous amounts of money.

Knowing that the book is rare, and that people are asking silly money for it, I thought I'd test the app to see what the offer would be. I had, and still have, no intention of selling the book - I just wanted to see what price I would get from my scan. 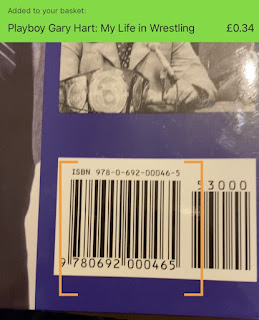 As you can see - I was offered an insulting thirty-four pence.
Sure, I wasn't expecting a range at the equivalent of $950-$1,353.99. However, I was expecting something higher than 34p!
I will forever be wary of these companies. The offer should have been a lot fairer than 34p based on how rare the title is.
The book came out in 2009. You can read what I thought of it in THIS POST.
Posted by David Taylor at 9:00 AM