For the past few weeks, whenever I've watched anything on Sky, I would come across adverts for a new US series called Resident Alien.

The pilot episode aired on Sky One at 2:00AM yesterday morning, so I decided to give it a watch.

No! I didn't catch it live. I recorded it. Only a madman would stay up until 2AM in the morning to watch something that's on at the same time as America. 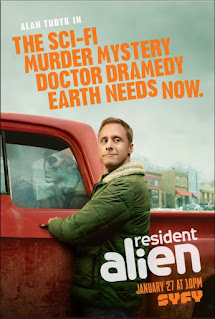 Before watching the programme, I did a little research about it. It's based on a comic book that is - or was? - published by Dark Horse Comics. I know the name of that company because, I believe, it is the group that picked up the rights to publish Star Wars comic books after Marvel's licence ended in the '80's/90's.
Anyway, back to Resident Alien.
The show stars Alan Tudyk as an alien who has taken on the identity of a doctor who resides outside a small US town.
I initially thought we were meant to see the doctor as the hero of this series, but that was put to bed almost instantly when we realise that the alien has murdered the person whose likeness has been stolen.
And then another doctor is murdered. Not by the alien. It is up to the fake doctor to perform an autopsy on the victim to see how he has died.
To cut to the chase - the alien ends up as the town doctor. And it looks like he'll end up trying to solve the murder of his predecessor.
It looks like the main plot will focus on working out who the murderer is. I already have a guess as to who it'll be (the deputy sheriff), but that's just a guess after watching a few scenes of her with the outspoken sheriff.
I'm going to continue watching the series and try to remember one important thing - the alien is not a hero. He's there to try and end humanity, but to solve a murder along the way.
Posted by David Taylor at 12:00 AM