In a post published on May 28th of last year, I wrote about a set of scented markers I was given to me by my aunt from America way back in 1990 as I prepared to start high school.
The markers bore the Lifesavers logo and had the smell of the American candy flavours.
I'm sure you're wondering why I am writing about these pens once again. Well, a few days ago, I was placing an order with The Works and noticed that they had a packet of scented pens in the sale. Considering it's a little over thirty years since I owned those American markers, I thought it would be fun to buy the pens that were on offer and get a blog post out of them.
So, here's what I'm going to do. I'm going to open these pens and try to determine what the 'flavour' is by sniffing them. 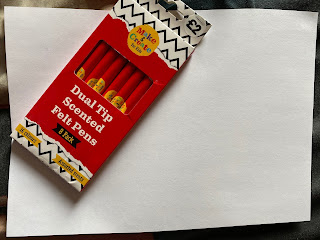 As you can see from the box, it states that they're 'Dual Tip'. There are eight pens, so that means I have to guess sixteen colours.
Here's what one of the pens looks like just so you can see what I'm dealing with here.

Okay, now you know what I have, I'm going to try the colours.
Purple: Hmm.. I can't get what this is meant to be. I was hoping for grape.
Orange: There's a hint of orange to this, but it's not strong at all.
Black: I don't know what this one is. However, the smell does seem familar.
Grey: It seems like there's not much difference between grey and black.
Bright Pink: This is the nicest one so far. I think it's bubblegum.
Dark Pink: Raspberry?
Turquoise: No... this one is raspberry! I think...
Flesh Pink: A third pink.... Not sure what this is meant to be.
Brown: There's a chocolaty hint to this one. Not as strong as the one I had thirty years ago!
Dark Green: Can't sense what this one is.
Yellow: Hmmm.. well, it isn't banana.
Light Green: A poor attempt at apple?
Red: I don't have a clue what this is.
Dark Brown: Okay, now this is a richer chocolate scent. It's somewhat similar to the Lifesavers one from 1990, but still not as strong.
Red Again: This one smells slightly like cherry, I guess.
Blue: Has to be blueberry.
The back of the packet lists the flavours. I purposely held off on looking until now. Let's see how close my guesses were.
Purple: Apparently, it is meant to be grape.
Orange: I was right, it is orange.
Black: This is meant to be blackberry. Licorice would have been better!
Grey: Remember when I wrote that 'there not much difference between grey and black'? Well, I was right as it is also blackberry.
Bright Pink: Raspberry. I guessed bubblegum, so I'm going to count that as a win because it could have been raspberry bubblegum
Dark Pink: This is also raspberry and I did indeed guess that. Why couldn't I figure out they both smelled the same!?
Turquoise: If I'm not mistaken, this one is meant to be 'mixed fruit' I thought raspberry again
Flesh Pink: Strawberry
Brown: Chocolate!
Dark Green: This one was supposed to be kiwi fruit.
Yellow: I wrote that 'it isn't banana' and I was wrong. It's meant to be.
Light Green: I think I might have read it wrong. This one is the kiwi fruit flavour.
Red: This isn't 'Red', it's another orange that is supposed to smell like orange
Dark Brown: Another chocolate. I was right.
Red: I guessed cherry and it was right
Blue: The guess was blueberry and it is indeed blueberry
All in all, these pens were quite rubbish.
Posted by David Taylor at 12:00 AM