Seeing as today is May 4th, I thought I'd write about Star Wars Nerds.

Nope, I'm not referring to fans of the Star Wars franchise. I'm on about American candy that I bought late last year from one of those companies over here that imports foods from stateside. 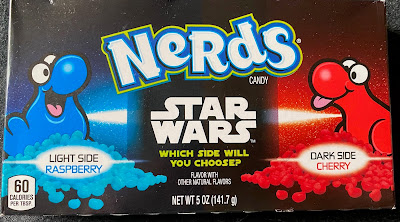 I thought that I had written about the sweets before today. However, it seems that I didn't because a search for 'Star Wars Nerds' didn't come up with anything on my Blogger setup.

There isn't really much I can write about these sweets, though. One side of them was flavoured raspberry with a light blue colour representing The Resistance. The other side of the box contained red Nerds. These were for 'The Dark Side' and had a cherry flavour.

Of the two flavours, cherry won my vote.

Back in the 1980's - while I was at junior school - Nerds was a fairly popular sweet in the playground.

Not popular with me, though.

The two compartments - in the Nerds sold over here in the UK - had cherry cola and watermelon.

I detest anything that is flavoured watermelon, so the only part I liked was the cherry cola. It seemed like a waste of time asking for a box Nerds knowing that I only liked a half of its contents.

As I am writing this post, a flashback from the 80's struck me. It is something that I've remembered from my childhood that has unearthed itself from the memory bank in my brain.

Nerds were actually banned in my school after a while. If I recall correctly, there was some panic made in the press about how glass was found inside a box and the producers had to recall the stock.

I can't remember for sure if that really did happen, or was a playground rumour. However, I know for sure that was the reason given by the teaching staff when they banned us from bringing them to school.

And on that note, I'm going to go and do something I have been holding out until today to do.

I'm off to watch Star Wars: The Rise of Skywalker!