The other day, when browsing YouTube, I was recommended the following video. 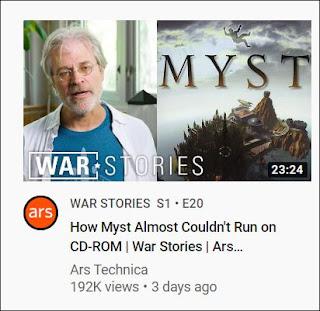 Seeing the word 'Myst' reminded me of my uncle, who passed away seventeen years ago this morning.

You see, and I am sure I've written about this in the past but I'm going to do so again today, my uncle loved the computer games like that.

I recall the time he told me about Myst while it was being developed and told me that it was going to be the next big thing.

Me? I've never played it. However, I know that he did.

The game that he owned that reminds me of him the most is Dungeon Master. He would spend hours sitting with me watching me play. Or try to!

I also recall he had a book with the maps of the levels. It wasn't a regular book, though. It was bound with the plastic spine thing that can be done in printing shops, if you know what I mean.

I've been thinking a lot about RPGs lately. Not just computer games, but the Fighting Fantasy books that were released by Puffin when I was a child.

I'd spend hours playing them. I asked my father if he remembered me playing them when we were talking the other day. I then asked if he recalled who had got me into them. My dad's guess was my uncle, but it wasn't. It was his best friend's son.

The point I am trying to make is, I am sure my uncle would have had a blast playing some of those fantasy role-playing books as well.

It's obviously too late to recommend it now, which is quite a shame. I kind of wish I had. Or - if I had! - I wish I could have remembered so I could have something more to write today.

There will be more to write in the future, though.

The 'Myst' video recommendation threw me off.

What I was initially planning today was a slight follow-up to last year's February 13th post. In 2019. I wrote about my uncle and aunt buying two games for the Christmas I had my Commodore 64.

The games were Rampage and Firetrap.

Well, what I did last year, was write about my memory of that day but then decided to watch the Rampage movie starring Dwayne Johnson.

With Johnson starring in a movie about a skyscraper on fire, I thought I would loosely follow it this year by tying his film with Firetrap.

I have had the movie on my cable hard drive for over a year to do this, but thought the Myst story was better considering Rock's movie isn't based on the computer game like Rampage is.

With that said, I MIGHT watch the film today just because of how long I've waited to see it!
Posted by David Taylor at 7:50 AM