Here's how next week was meant to have panned out.

On Saturday morning, I was going to sign up for the ESPN Player Internet service. The plan was to pay the £69.99 or £79.99 - I cannot recall which as of right now - for the annual pass as it's cheaper in the long run.

The reason? Well - I want to watch the relaunch of Vince McMahon's XFL American football league and ESPN has the streaming rights to air the content over here in the UK.

That's no longer going to happen.

Something better has happened.

I was just browsing through the on-air TV guide and decided to type in 'XFL Football' to see if ESPN (or rather BT Sport) had the television rights to air the games.

Look what came up. 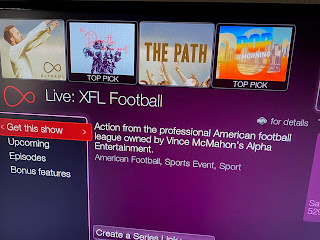 The games are going to be televised on TV here in the UK, so there's zero reason to buy the online subscription as I can watch the games on BT Sport's channels.

Well, for the first week at least.