Betting On The FA Cup 3rd Round

This weekend is the FA Cup third round - the time of the competition when I like to have a little flutter with a trick I like to do this time of year.

I've written about my approach to betting on the FA Cup third round before, but - for people who might be checking in for the first time - I'll give a quick intro to it.

I place all of the leagues together into one giant league table. They're ranked in order, so Liverpool - who are first in the Premier League - is number one in my league. Then, Leeds - who sit at the top of the Championship - are 21, Wycombe (number 1 in League 1) are  45, League 2 leaders, Swindon, is 68 in my accumulative league and so on.

Once I have my own league table, I then look at the fixtures for the round and then see how much of a divide there is between each side.

I then sort the spreadsheet to work out which teams are the strongest to play as home favourites and those that are strong to play as away faves.

In the table below, I've colour coded the home teams with the strongest league position in green. The teams that are travelling with a better position in my league are in the pink/peach colour. 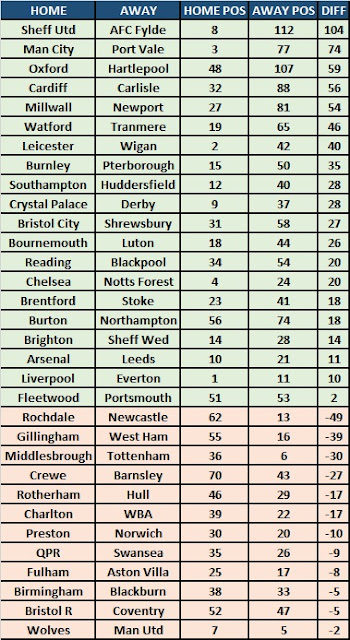 Using my table, I've bet on: