Andrew Luck Retires From The NFL 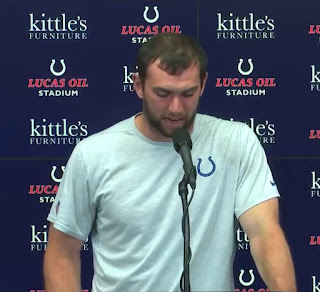 It has just gone 4:00AM BST as I am writing this. I've been awake for almost an hour. Why am I up? Well - I looked at Twitter.

Here's a lesson for you. When you wake up in the early hours, NEVER check out Twitter. You might see something that's going to wake you up even more.

It happened to me this morning. There was an alert telling me I had a direct message. I opened it. A friend of mine had left a picture of a tweet sent by the sports reporter - Adam Schefter. It stated that Andrew Luck was planning to announce his retirement.

Yes. Andrew. Luck. Was. Planning. To. Announce. His. Retirement.

The reason given was due to all the wear and tear that he has endured. He has recently been sidelined with a calf and ankle problem.

As an Indianapolis Colts fan, who had visions of Luck being this year's MVP (I have, or rather had, £50 on it!) and even going on to lead the Colts to a Super Bowl, this is devastating news.

Apparently, Luck's press conference was meant to be later on Sunday. Due to story leaking, they had to do it right after the game against the Chicago Bears. I watched it.

As I watched, I didn't have a feeling of sadness as I did when I watched both of Peyton Manning's speeches live (I watched the one when he announced his departure from Indy and the one when he officially retired as a Denver Bronco). Watching Luck's presser,  I couldn't shake off the feeling that this is not the end of his career.

I think he'll return with another team. Next year.

If I am wrong, and this is not an orchestrated exit strategy, then this is not the way the story should have ended.

And if I'm right. - this is not the way the Indianapolis chapter should have ended.
Posted by David Taylor at 4:18 AM