Seeing as it's Star Wars Day and Peter Mayhew has recently passed, I thought I'd once again write about Mayhew. This time, however, I thought I'd share the statement that Harrison Ford made following the news: 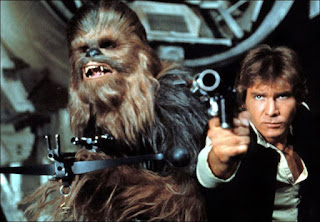 Peter Mayhew was a kind and gentle man, possessed of great dignity and noble character. These aspects of his own personality, plus his wit and grace, he brought to Chewbacca. We were partners in film and friends in life for over 30 years and I loved him. He invested his soul in the character and brought great pleasure to the Star Wars audience. Chewbacca was an important part of the success of the films we made together. He knew how important the fans of the franchise were to its continued success and he was devoted to them. I an millions of others will never forget Peter and what he gave us all. My thoughts are with his dear wife Angie and his children. Rest easy, my dear friend...

Such a nice tribute.
Posted by David Taylor at 7:00 AM