With the New Year posts of the way, it's time to finally share the results of my final week of playing a scratch card a day in 2018.

When I last checked in with an update on December 23rd, I pointed out that I was at -£190 for the year. I closed out the final week and a bit with the following: 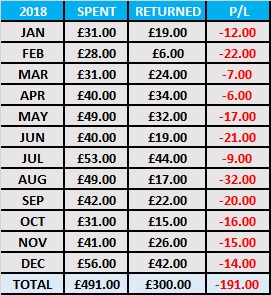 While this is the end of the 2018 Scratchin' updates, it isn't the final time of playing a scratch card a day.

I've decided to continue through 2019 and have set up the blog called Scratch of the Day over at ScratchOfTheDay.net.

The slate has been wiped clean, but I do intend to keep track of the 2019 numbers along with 2018 at certain points throughout the year.
Posted by David Taylor at 12:24 PM