Another wrestling personality from my childhood has passed away.

The death of 'Mean' Gene Okerlund, who is best remembered for his time as a WWF broadcaster during the company's initial boom period in the 1980's, was announced yesterday. 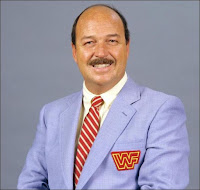 Okerlund was a huge part of the WWF when I first became a fan. His main job at the time was as a pitchman. He'd interview the wrestlers to get angles and matches over.

He was also kind of like a conduit between the promotion and the fans at home. Especially when it came to the segments that were inserted in the WWF TV shows where he would plug upcoming tours to us over here in the UK.

The 'Event Center' content was regional. He would do similar content for other countries, cities or towns.

He left the WWF in 1993 and began working for World Championship Wrestling. I always remember when he showed up on WCW TV and being surprised to see him on a different show after watching him with the WWF for all those years.

Okerlund returned to the WWF in 2001 following WCW's demise. From what I remember, he worked on the WWE Confidential show and would come in now and again for DVD interviews or special events like WrestleMania and special editions of WWE Monday Night Raw.