In last Monday's post, I mentioned that I have managed to find all of the Christmas crisps flavours that Walkers have released in time for the festive period. In today's post, I'll rate them. 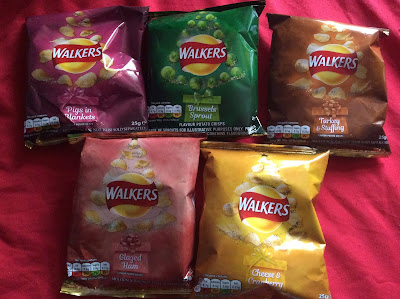 As you can see, there are five flavours out there for you to buy. They are: Pigs in Blankets, Brussels Sprouts, Turkey and Stuffing, Glazed Ham and Cheese and Cranberry. 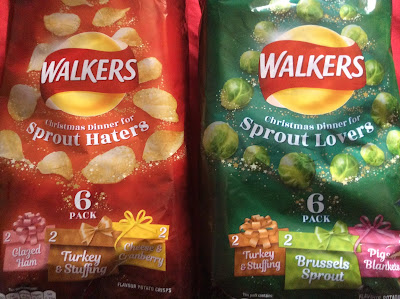 After trying them all out, I thought I'd rate and rank them in order.

5. Brussels Sprouts (2.5 Stars)
I didn't hate them, but - compared to the rest - they weren't beating anything. I decided to give it average marks because they weren't dreadful, but weren't great. I am a sprout lover despite what you might think.

3. Glazed Ham (3.25 Stars)
We're now in a region of the scale where I begin liking things a lot. Glazed Ham was the best flavour of the lot until...

1. Cheese and Cranberry (4.25 Stars)
This was the final packet I tested and I left the best until last. I like cheesy crisps. The sweety(ish!) cranberry made it unique and was worth ranking high.