I've Placed Another Both Teams, Both Halves Bet

If you didn't read yesterday's post, you won't know what I'm about to write about.

I've decided to run with the idea of betting on four football games to have both teams score in both halves each weekend.

The Lucky 15 has been placed. This games I've covered this weekend are: 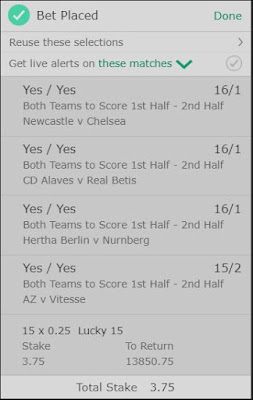 I have picked these games because I asked four people to pick one team from each league. The results were:

Next week's teams will be whoever the above are playing this week. I don't plan to publish a weekly update for now, but.. knowing me, I'll probably end up changing my mind.
Posted by David Taylor at 1:36 PM

Email ThisBlogThis!Share to TwitterShare to FacebookShare to Pinterest
Labels: Both Teams Both Halves Betting