Cuff And Link Are Still With Us

I have been following Sylvester Stallone on social media a lot lately. The reason why is because he is in the midst of production on the sequel to Creed and I am interested to see any developments he is willing to share with his followers.

There was a picture he posted on Instagram a few days ago, which made its way to Twitter yesterday, that made me go 'wow, cool'.

Remember in the first Rocky how the title character had a pair of turtles? One was named Cuff and the other was named Link? 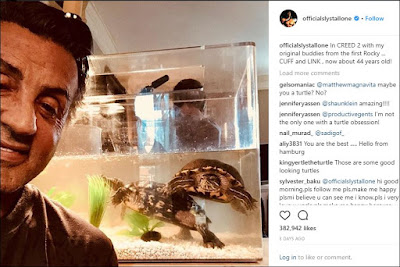 Stallone posted a picture of himself with the two animals, stated that they were both around forty-four years old and mentioned that they'll make an appearance in Creed II.

I was slightly annoyed that Rocky Balboa (It's Rocky VI to me!) didn't have Adrian as she had died in the years following Rocky V and didn't like that her brother, Paulie, had died somewhere before we met back up with Rocky for Creed, so it's cool to see characters - albeit very minor! - from the original series show up for the modern-day stories.

With that said, a certain Russian from Rocky IV is going to be in Creed II.
Posted by David Taylor at 5:44 PM