KFC's Double Down Is Coming To The UK

KFC announced something big to the UK the other day when it revealed that the Double Down burger will makes its way to these shores next week.

I thought I had written about this burger when it first came out in the US many years ago. I did a search before writing this post, but could not find any mention of it. This is surprising because I know for sure I wrote about how I wanted to try one after reading all about it.

The Double Down, which first came out over there in 2010, is a burger that has no bun. Instead of the bread roll are two chicken fillets. Sandwiched in-between them is bacon, cheese and barbecue sauce. 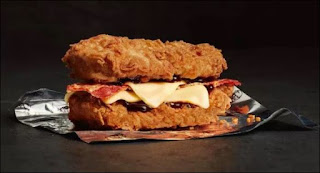 When it went on sale in the States, it became such a hit that the limited run - which started in April 10 2010 and was meant to end on May 23rd 2010 - was extended indefinitely.

It'll be interesting to see if something similar happens here in the UK.

The product is due to launch this coming Monday (October 9th 2017) and, according to reports, it'll only be around for six weeks.
Posted by David Taylor at 10:54 AM