Does anyone remember the comic strip and cartoon of Bananaman?

Well, there's a musical about him that's coming out during the festive period. 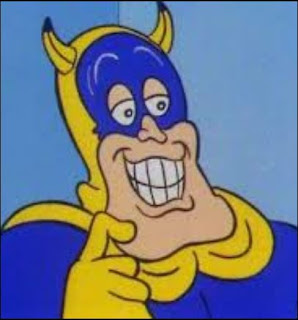 The cartoon strip used to be in The Dandy comic when I was a child. I read earlier today that he has since moved over to The Beano.

The musical will be about the Batman/Superman parody who becomes a superhero after a young boy names Eric eats a banana and turns into the larger-than-life character.

In the 1980's, the BBC aired a cartoon series with his adventures. I believe this would have been where I first came across him. I can't say for sure whether he was the reason why, but I did become a Dandy reader after watching the cartoon.

Bananaman will run from Friday December 15th to Saturday Janaury 20th at the Southwalk Playhouse in London.
Posted by David Taylor at 8:00 PM