The NFL released its 2017 schedule at 1am BST today.

Shortly before all the games were announced, the league revealed that the opening night's game will see the New England Patriots face the Kansas City Chiefs.

If you read yesterday's post, you'll know that this is the game that I predicted. I don't usually get these picks right, so I'm going to give myself a pat on the back.

To be fair, either Atlanta or Carolina would have been my choices of opponent for New England, but I did a good job - I believe - of cancelling out the respective chances of the teams being selected.

Anyway, as soon as I knew what the opening game would be in September, I figured there was no other reason to stay up for the publication of all the other games. So, I turned everything off and went to bed with the plan to look as soon as I woke up.

I did that. This is what I was met with this morning... 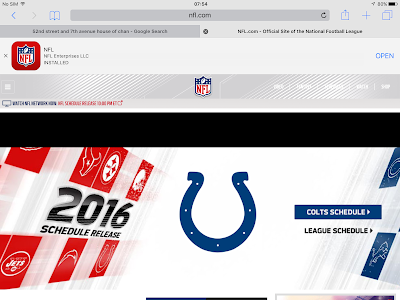 As a fan of the Indianapolis Colts, I have the NFL website set up to give me any Colts news. The first thing I saw was the horseshoe and the announcement of the....

It's obviously an error as the link sends me to the 2017 match-ups. I will now spend the rest of the day working out what I'll be doing throughout the autumn months.
Posted by David Taylor at 8:39 AM