For over a week, I have been keeping track of Cadbury's latest promotion. The chocolate company offered its customers a 'share' in its new product - Wispa Gold Hazelnut Flavour - and then, from there, the shareholders would be able to follow a fictional stock market which would be updated frequently to show how much - in Wispa Gold Hazelnut bars - each share would cost.

The promotion ended on Friday with the closing price of a share being the equivalent of six bars.

As a bit of fun - seeing as I had anted up and paid the 69p for one of the shares - I decided to keep track of the share price each day. Unfortunately, it didn't turn out as I had planned. I expected there to be daily updates, but - with last weekend and the Bank Holiday - there were not as many updates as I had anticipated. Still, I kept on top of it and this is how the stock went. 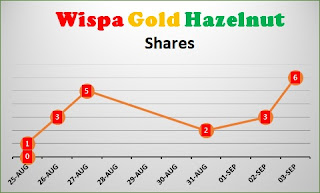 In the last update I posted, on Wednesday, I mentioned that the Twitter account teased an upcoming 'drop'. I mistakenly thought that the 'drop' referred to the price descending. What it actually turned out to be was an introduction of new shares for those who may have missed out the initial sales a week earlier.

The announcement that the 'share' price had closed at six bars was made at 3:00PM on Friday afternoon.

My winnings, if you can call them that, arrived in yesterday morning's post. 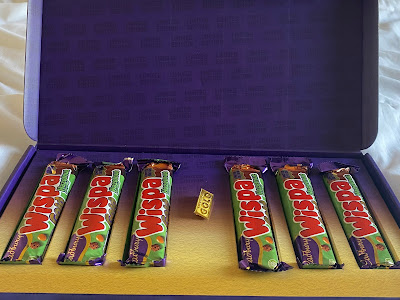 The six bars came in a display box along with a Wispa Gold badge. Also included was a 'shareholder certificate' which indicated that I was the 1,662 holder out of, I believe, 4,000. 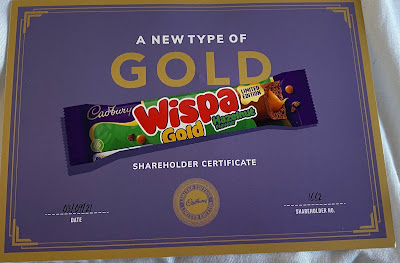 Not bad for a 69p investment, is it?
I was quite reluctant to even take one of the bars out to try one. The display looked cool and I didn't want to ruin it by removing any of the bars. That thought was soon done away with. I had to taste one.
When I took my first bite, the first thing that came to me was 'this tastes like Christmas'. As I munched on, I still couldn't get the festive feeling out my mind. It then dawned on me why I reached the initial reaction.
The only chocolatey-hazelnut product that I can relate to the new bar is the green triangle chocolate that are found in tubs of Quality Street.
These bars taste like a collision between the Quality Street triangle with an original Wispa Gold. They complement each other well. But, just like with Quality Street, it's something I would consider having on rare occasions rather than throughout the year.
And that's really what Wispa Gold Hazelnut is for now. Rare. The product is currently only being sold for a limited time starting from tomorrow.
Posted by David Taylor at 12:00 AM