I have tried to stick to my plan of following the 'shares' of Cadbury's Wispa Gold Hazelnut that I wrote about last week, but the Cadbury Twitter campaign took a few days off over the long weekend.

Cadbury UK's social media account returned to covering its Wispa campaign yesterday by announcing one of the 'shares' is now the equivalent of two bars of the soon to be released chocolate. The account went on to state that experts 'suggest a 2nd drop coming soon.'

Going by the wording, I'm going to predict that - when today's share price is revealed at 12PM  - that the number will be down to one bar.

If I were to make a prediction, I'm going to guess that tomorrow's price will return to 2 bars followed by one more jump before Friday's close.

Therefore - I expect three bars is where it'll close when the promotion ends on Friday. 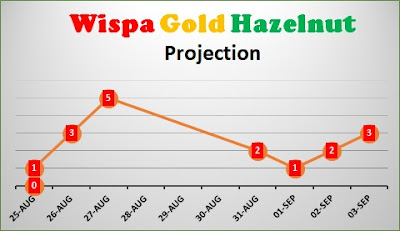