I woke up in the early hours of yesterday morning to find out that Kamala had passed away after contracting coronavirus.

The Ugandan Giant had short spells in the WWF when I was a child. Despite those brief runs in the WWF, Kamala had a lengthy journeyman career  starting out in 1978 as 'Sugar Bear' Harris.

The Kamala gimmick was that of an African native. He'd come to the ring with a shield and spear. His body and face would be covered in tribal paint. He also wouldn't talk English and would need handlers to bring him in and out of the ring.

It's a character that I highly doubt would be seen as politically correct nowadays. 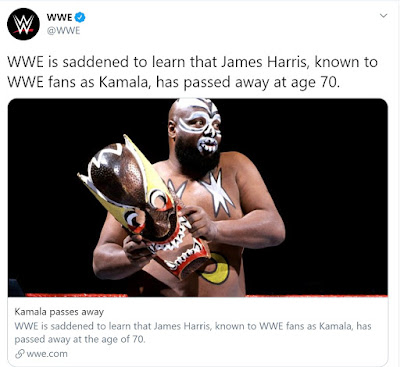 I do have some fond memories of the character.

I wasn't following the WWF when he had his first stints in the company, but I was when he returned in 1992. He had a feud with The Undertaker which saw the pair wrestle at Wembley Stadium at SummerSlam 1992.  There was also the coffin match the two had months later at the Survivor Series.

After the coffin match loss, they turned Kamala into a babyface but it was short-lived.

I can't recall exactly when he showed up, but I can remember him being a part of WCW in 1995 and then - after that - he would make rare one-night appearances in WWF/WWE, but - like I said - they were infrequent.

I remember him inside William Regal's office and standing on the table. Regal made me laugh out loud when he said something like 'what's he bloody doing on my table!' (or something along those lines).

I never got to see Kamala wrestle live. However, there was an occasion when I fell for a bait-and-switch by a British wrestling company.

In early 1993, I saw a poster advertised locally with Kamala and the Mongolian Mauler advertised. As noted above, Kamala was still contracted to the WWF and working as a babyface at that point but I still went to the show.

Well, I don't really need to continue do I? Yes - there was no sign of Kamala, but the Mongolian Mauler was there.

Another completely random memory I have of Kamala had nothing to do with seeing - or not seeing! - him wrestle.

I used to buy WWF bubble gums on the way to school. They'd have a sticker inside them. Well, on one of those days walking to school, the packet I had included a sticker of Kamala. Later that day, I was in one of my classes and must have been bored so I started messing around with the Kamala sticker. I tore around his head and put the sticker on the head on a picture of a motorbike rider that was on my pencil case.

I showed the people sitting around me in the classroom and it entertained them for a second or two.

Over the past few years, I read that James Harris - the man who wrestled as Kamala - had to have his leg amputated - among other ailments - so it doesn't seem like he was doing well in his later years.